Broward Sheriff Gregory Tony said Wednesday that two more deputies were fired this week over their performance during last year’s mass shooting at Marjory Stoneman Douglas High School in Parkland, when 17 students and staffers were killed and 17 injured. 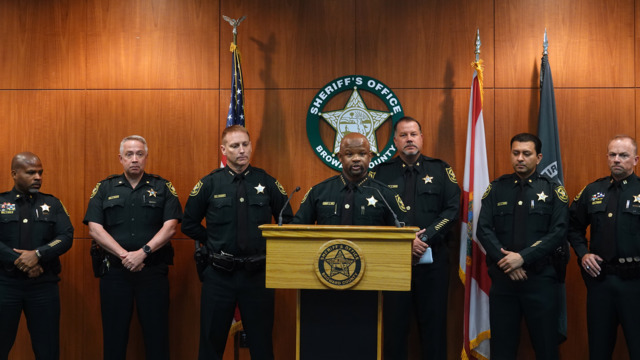 Broward Sheriff Gregory Tony announced that two additional deputies have been fired as a result of the agency’s internal affairs investigation into the mass shooting at Marjory Stoneman Douglas High School in Parkland at BSO headquarters in Fort Lauderdale, Wednesday, June 26, 2019. The two are Deputy Edward Eason and Deputy Joshua Stambaugh.

MIAMI — Broward Sheriff Gregory Tony said Wednesday that two more deputies were fired this week over their performance during last year’s mass shooting at Marjory Stoneman Douglas High School in Parkland, when 17 students and staffers were killed and 17 others were injured.

During a brief press conference at BSO headquarters, Tony said deputies Edward Eason and Josh Stambaugh were let go for “neglect of duty.” That brings the number of deputies fired in the aftermath of the worst high school shooting in Florida history to four.

The sheriff, who also touched on a string of other ongoing probes of controversial arrests by other BSO deputies, didn’t go into any detail about the two deputies’ failures during the Parkland shooting. He said that information would be made public later in the day.

Earlier terminations related to Parkland include MSD School Resource Officer Scot Peterson, who chose not to enter the school during shooter Nikolas Cruz’s rampage, and Sgt Brian Miller, the first supervisor on the scene, who hid behind his car as three or four shots were fired. Three other deputies, Brian Goolsby, Michael Kratz and Arthur Perry were cleared of any wrongdoing.

Tony had little to say other than announcing the firings, adding he decided to gather the media to allay concerns with the public and Broward County leaders that BSO was slow-walking several internal affairs investigations.

The sheriff said two other internal reviews had been passed along to the Broward State Attorney’s Office and that his department couldn’t come to any conclusions on them until the state decided whether to move forward or not with charges against those officers.

Tony, appointed by Gov. Rick DeSantis in January after the firing of elected Sheriff Scott Israel, has been embroiled in political controversy over the Parkland shooting and a series of rough arrests caught on cellphone video involving his deputies. Israel continues to fight to get his job back, arguing before the state Senate in recent weeks that he wasn’t at fault for the Parkland massacre.

The former sheriff said he intends to run for office once again in 2020. Tony, a former Coral Springs officer who runs a security company, hasn’t committed to the race.

Tony’s announcement came just a few hours before a scheduled press conference at the Broward County Courthouse by civil rights attorney Benjamin Crump and members of the NAACP, who have griped about inaction taken by BSO after two deputies were caught on video violently arresting an unarmed Coral Springs high school student.

Back in April as students from nearby P.J. Taravella High School gathered in a McDonald’s parking lot in neighboring Tamarac, two deputies were caught peeper spraying then slamming 15-year-old Delucca Rolle’s head into the pavement. The teen had just picked up a cellphone dropped by another teen when the officers went after him. Rolle was charged with assaulting an officer and obstruction without violence. Those charges were later dropped.

The video quickly went viral and caught the attention of several star professional athletes, including LeBron James, celebrities and activists who demanded the deputies be punished. Soon Tony — who had relieved deputy Christopher Krikovich and Sgt. Gregory LaCerra of duty — suspended them in full, ordering them to turn in their badges and stay off BSO property.

Tony began an internal review into the actions of the officers and turned it over to the state attorney’s office in May, where it’s currently under review. On Wednesday the sheriff said he was handcuffed until the state makes a decision on charges.

“We can’t move forward until we hear back from the state attorney,” Tony said.

Also Wednesday, Tony addressed the situation of Deputy Jorge Sobrino, whose body camera footage showed him punching a man handcuffed to a bed at Broward Health North Hospital on Jan. 1. David Rafferty O’Connell was arrested and charged with disorderly conduct, battery on a law enforcement officer and resisting arrest without violence at a Walmart.

In the video, O’Connell clearly antagonizes the deputy, yelling and standing on his hospital bed before the officer strikes him. Tony said like the Delucca case, his office can’t move forward on the Sobrino investigation until the state attorney makes a determination.