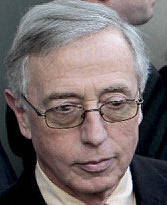 The U.S. Court of Appeals for the 3rd Circuit has denied former Luzerne County Judge Mark Ciavarella’s request to rehear his case and overturn felony convictions in the “Kids for Cash” scandal due to the ineffectiveness of his trial attorneys.

In a May 7 ruling, U.S. Circuit Judge Thomas L. Ambro said Ciavarella’s petition would not be heard by either the panel of three judges that decided his case or the entire court.

Nearly a month earlier, Ciavarella’s attorney Jennifer Wilson asked for a rehearing on the three charges of honest services mail fraud left standing by the panel of the Philadelphia-based court in its March 29 decision. The panel rejected the argument Ciavarella’s convictions on those felonies should have been included with the others vacated by a lower court because of the failure of his attorneys at his 2011 trial to raise a defense that the alleged crimes occurred beyond the five-year statute of limitations for filing charges.

Ciavarella, 69, along with former county judge Michael Conahan, 67, were charged in 2010 with participating in a $2.8 million kickback scheme involving the construction of two, private for-profit juvenile detention centers in Pittston Township and Butler County and the placement of youths in the facilities.

Conahan pleaded guilty to racketeering and was sentenced in 2011 to 17½ years in prison. He has been incarcerated at the Federal Correctional Institution in Miami, Fla. The Federal Bureau of Prisons’ website listed his release date as Dec. 18, 2026.

Ciavarella chose to go to trial, was convicted and sentenced to 28 years in prison. He has been serving his sentence at the Federal Correctional Institution in Ashland, Ky.

The panel’s decision to affirm the lower court’s ruling to vacate Ciavarella’s convictions on racketeering, racketeering conspiracy and conspiracy to launder money could affect his release date of Dec. 30, 2035. U.S. District Chief Judge Christopher C. Conner of Harrisburg ordered a retrial on those charges.