To find more information on Criminal Defense Investigation log onto: 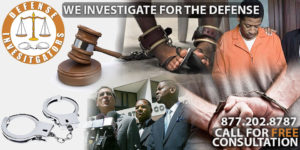 The police can be of great service to prosecutors when it comes to finding witnesses to a crime and to following the evidence to a suspect. However sometimes the defense is going to realize that there seems to be key evidence missing or witnesses that have not come forward: the defense attorneys are going to find a basis for reasonable doubt.

However, in order to know that their assumptions about their client’s innocence are correct, they will need to conduct a criminal defense investigation. Lawyers do not investigate. There are vital witnesses that need to be found and interviewed, and various records that need to be obtained right away if you are going to fight your case. If you want to fight, you need one essential thing, a serious defense team consisting of a very skilled Criminal Defense Lawyer with experience in multi-codefendant drug conspiracy cases, and a criminal defense investigator that will be committed to finding people that will help your case, and that can perform background investigations on all involved government witness, and fight for your freedom

A Criminal Defense Investigator serves an important role in a criminal defense investigation. In this case, that role is to find witnesses and evidence that will establish reasonable doubt that will show the jury that there is reason to believe that the defendant is not actually responsible for committing the crime.

During the course of the criminal defense investigation, the defense investigator will go through routine reports from the police, everyday paperwork as well as copies of evidence, photographs, phone messages, text messages. Wiretaps, videos, tape recordings and witness statements related to the case. The goal of this is to determine whether or not there are any inconsistencies from one witness to the next or between the conclusions drawn and the evidence.

In addition, during a criminal defense investigation, a defense investigator must re-visit the crime scene to see if there was anything that had been overlooked. Must take pictures, and videos from the defense perspective so the defense will have their own crime scene pictures and videos and not use the governments taken by the crime scene technician. He or she may also interview witnesses to see if their stories have changed or to verify that they do not have anything else that motivated their statements against the defendant.

In some cases, that may mean that a search is conducted to find these other witnesses. In other cases, it may mean conducting interviews or doing background searches. In others, there may be other parts of the criminal defense investigation that are assigned to a defense investigator tasks that he or she is uniquely qualified for and that will keep the defense team free to focus on the legal proceedings and other cases that they have.

Investigation is the key to every criminal case. The Detective Agency has investigated numerous criminal cases nationwide. Our office has been involved in the success of numerous cases. This success was not only because of experienced trial attorneys, but because of the thorough investigations that were provided by our office which enabled the attorneys to successfully defend their clients. You are innocent until proven guilty. You are entitled to a lawyer to represent you on all criminal charges whether you can afford one or not. However, even if you have a criminal defense attorney, a criminal defense investigator can be critical to the out come of your case. If you are going to fight your case and go to trial you need a complete investigation done on your case.

So, let’s take a look at how a typical case works:

Someone witnesses a crime and calls law enforcement. A patrol officer gets a radio call and heads to the scene. He figures he’s headed to a crime situation. Why else would they need him?

Often, it’s at the discretion of those officers on the scene to determine what happened and who did what. From there, it becomes a series of reports, written and oral, based on those determinations. If detectives get involved, they put together a theory and seek to gather evidence to support it. Maybe they know who is guilty, maybe not. They gather what they believe to be facts about the case. When they have enough to make an arrest, a “suspect” is taken into custody. Detectives may continue to investigate after the arrest in order to bolster their case.

Our laws require that a defendant receive a suitable defense. When defendants cannot afford to hire an attorney, one is provided by either the public defender’s office or a court-appointed private lawyer. If a private attorney is retained by the state, a private investigator may be appointed also by the state if the attorney requests it and a judge approves.

If a defendant does hire an attorney, it is up to that attorney to decide whether an investigator is needed. According to noted defense attorney F. Lee Bailey, an adequate defense cannot be prepared without the assistance of a Criminal Defense Investigator.

To support that belief, take a look at what has happened by the time a criminal defense investigator does get involved. A team of uniformed police, detectives, laboratory and crime scene investigators, selected witnesses, recorded jail phone conversations, street informants on occasion, and the office of the prosecution attorney have all contributed to the prosecution’s case, which is to be disputed by one attorney and one investigator. And then, only after it has all been written up in reports which support a conviction, does an investigator get involved. It’s an uphill climb.

Criminal Defense Investigation is about finding mistakes and holes in the prosecution’s case and uncovering evidence and witnesses which will refute their claims—perhaps even an alibi. It also can involve finding what is called “exculpatory evidence”—evidence which might have helped the defendant, had the prosecution revealed its existence to the defense. If law enforcement interviewed any witnesses who are not on the State’s witness list, a Criminal defense Investigator should speak to them, for sure. Defense attorneys like to know ahead of time what a witness is going to say in depositions, if possible.

It also helps to visit the scene of the crime, even though it may be weeks later. It helps form a picture and may point to areas which were neglected or not followed up on by the prosecution investigators.

One question which should be asked of law enforcement personnel who were on the scene of an incident is, “At what point did you determine a crime had been committed?” If an officer is headed to a call with a predetermination that a crime is taking place, an arrest is imminent. If not, what fact at the scene changed his mind?

Criminal Defense Investigators must be good at conversation on all levels. It helps to be pleasant when talking to witnesses. If you need to talk to an illiterate street person or CEO, know the language. We do not interrogate anyone. Sometimes we need to know what a witness might say if asked a particular question by the prosecution. When that situation arises, tell the witness you might sound like you’re not on their side. Assure them that you are, and tell them why you might be asking a possibly unfavorable question.

A criminal case deserves a thorough investigation, and attorneys do not like surprises in the courtroom.

In questioning witnesses or writing reports, use the term accuser rather than victim. The word victim implies someone suffered some sort of negative consequence. “Accuser” indicates possible doubt. And remember, if your case goes to trial, reasonable doubt is what you and the attorney hope to establish.

I have encountered three different attitudes in attorneys handling criminal cases. Some want to believe their client is innocent in order to get an acquittal. Others believe their client is guilty of something but perhaps not exactly what they’re charged with. Some don’t care either way. They are just concerned with whether the prosecution can prove its case.

Empathy can help, but in all cases stay away from personal or emotional connections with witnesses and defendants. Focus on facts.

The Myths and the Realities

It’s been my experience that prosecutors will charge a defendant with the most severe offense they can based on their information. I believe that is for plea bargaining purposes. Less than five percent of criminal cases in our state ever go to trial.

Reinforcement of my beliefs in criminal defense are demonstrated by facts and figures produced by the Innocence Project. Over 300 inmates in prison for serious crimes have been exonerated by new evidence, which for whatever reason was not presented at trial. Seventy-five percent of them were convicted on eyewitness testimony.

Innocence Project believes 1.5% to 5% of inmates in U.S. prisons are not guilty of the crime for which they are incarcerated. That’s a lot of “proven guilty” individuals.

Your job is to take care of your defendant and your attorney the best way you know how.

Paris London is a licensed Certified Criminal Defense Investigator. As a devoted career Criminal Defense Investigator, he has unwaveringly devoted his practice to the defense of state, and federal criminal cases and other federal matters since 1995. He have also investigated over 1000 criminal cases federal and state and have provided defense investigative services in all types of criminal cases through out the United States. He can be contacted toll Free 877.202.8787 or on the internet at www.DefenseInvestigators.com or www.The-DetectiveAgency.com

Offices throughout the United States.

Mistakes are made, and it’s a Criminal Defense Investigator’s job to balance the scales. “Law enforcement personnel believe the evidence does not lie. It can, however, can be misinterpreted.”