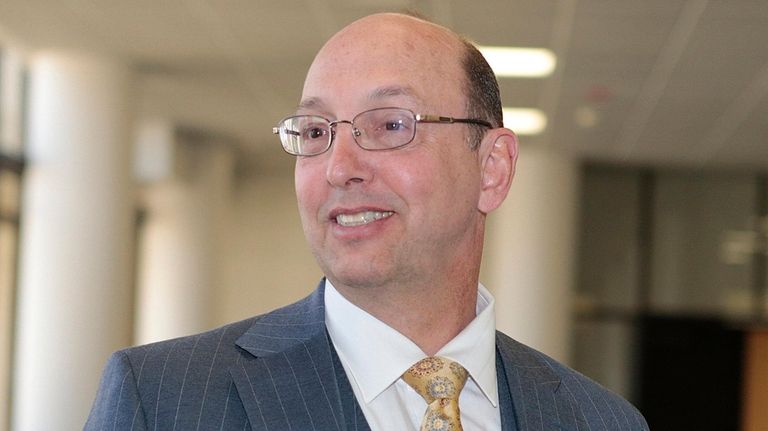 John Scarpa’s conviction stemmed from a witness he had testify during the 2015 double-homicide trial in Riverhead of a gang member. Photo Credit: Joseph D. Sullivan

Defense lawyer John Scarpa could serve up to 10 years in prison after his conviction in  Brooklyn federal court on Thursday of conspiring to bribe a witness to lie during the 2015 double-homicide trial in Riverhead of gang member Reginald Ross for killing two Long Island men.

Scarpa, 66, a seasoned Queens defense lawyer from Hauppage, was found guilty by jurors on the second day of deliberations. U.S. District Judge Carol Amon let him remain free pending his sentencing on Sept. 18, but ordered him to stop practicing law.

“I’m disappointed in the verdict,” Scarpa said, pledging an appeal before he shook hands with and embraced a small contingent of supporters who attended the four-day trial.

Ross, a Crip, was accused of two separate killings — ambushing John Williams of Holbrook, in an attempt to lure a man who owed drug money back to Long Island, and murdering Raymond Hirt of Mastic Beach, a road flagman who Ross thought had disrespected him in a dispute.

Scarpa was charged with using incentives to get Luis Cherry, an imprisoned gang member who had pleaded guilty to being an accomplice of Ross in the Williams killing, to change his story and testify at the trial that he acted alone. Cherry did so, but despite his testimony – complicated by his two earlier confessions implicating Ross and the fact that Ross’s car was present at the ambush — Ross was convicted after a three-month trial.

Get the latest breaking news as it happens.

In other tapes that didn’t involve Scarpa, Gallman — who pleaded guilty last year — bragged that he had offered Cherry help with an appeal, and prestige in the prison system that would keep him from being targeted as a snitch by other inmates. Prosecutors argued that Gallman’s promises were bribes, and he and Scarpa had conspired.

The government also put into evidence texts and tapes indicating that Gallman and Scarpa plotted to bring up to 20 gang members from Queens to pack the Riverhead courtroom to intimidate a government witness, and a call in which Scarpa yelled at Gallman after learning in court that prosecutors knew about the jail visit to Cherry.

Scarpa’s defense lawyers said the prosecution never connected Scarpa to the promises, maintained that Cherry took the stand for Ross because he had a grudge against Suffolk prosecutors and not because of a bribe, and urged jurors to ignore the witness-intimidation evidence as irrelevant to a bribery trial.

Thomas Kenniff, Scarpa’s lawyer, said after the verdict he didn’t believe the evidence supported a conviction. “Trials go down a lot better when you’re on the winning side,” he said. “It’s tough to accept.”

The defense at trial described Scarpa as an aggressive defense lawyer, but said he had no motive to put his career on the line. Prosecutors said his motive was the desire to win, and burnish the street credibility of his Queens law office.

“The jury saw through Scarpa’s corrupt scheme,” said Richard Donoghue, U.S. attorney for the Eastern District of New York. “ … The defendant will now face prison and disbarment for attempting to undermine the criminal justice system and violating the law he was sworn to uphold as an attorney.”

Medical Marijuana Update
Why Use A Defense Investigator In A Criminal Case?   Call Today 877.202.8787