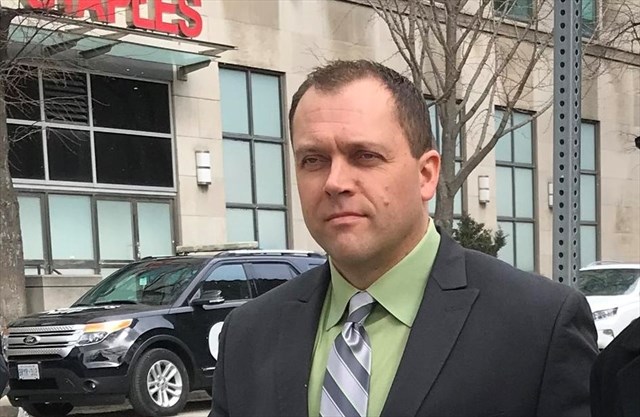 “The author of his own misfortune.”

“A man of profoundly flawed character.”

“Abused his position of trust and authority.”

“These are not victimless crimes. The victim here is society.”

Justice Robert Clark let Craig Ruthowsky have it with both smoking barrels.

That’s officer Ruthowsky, a detective with the Hamilton Police Service, who can now — with his prison sentence delivered Tuesday on convictions of bribery, obstruct justice, breach of trust and trafficking cocaine — finally be fired from the job that had been paying his salary since he was suspended in 2012.

Thirteen years in penitentiary, and three more on top of that should Ruthowsky fail to pay a $250,000 fine — roughly equivalent to the amount he’d received in bribes from drug dealers in a pay-for-protection scheme — within 12 months. In the University Avenue courtroom, Ruthowsky’s mother sobbed, burying her face in her husband’s shoulder.

The officer’s wife, a cop herself, shook her head vehemently as Clark speculated that she had known plenty more about Ruthowsky’s corrupt practices than she claimed.

And thus, as the hearing concluded, Ruthowsky, 44, removed his tie and belt, handing them over to defence lawyer Greg Lafontaine, before cuffs were slapped on his wrists and he was escorted out by court constables, taken into custody.

Afterwards, in the corridor, Ruthowsky’s mother wailed: “You don’t get that much for rape!”

His sister hissed: “It’s unfair! He didn’t take a cent!”

Ruthowsky’s family should have seen this coming. A week earlier, Clark had scoffed at the sentencing recommendations put forward by the Crown (10 years) and the defence (three to four years), declaring either option unfit for so appallingly crooked a cop. Essentially, in a rare occurrence, he rejected the submissions as too lenient, so grave, egregious and repugnant were the crimes. Clark had said: “It’s a scandalous amount of money that this man used his badge to generate as if it were an ATM, a cash machine.”

And so Clark read, for three hours bracketed around the lunch break, though he could just have easily gone straight to his reasons and released the entirety of decision in written form. But his methodical recitation — and perhaps this was the intent — left no time for Ruthowsky’s lawyer to go immediately across the street and apply for bail pending an appeal. That will happen on Thursday, meaning at least two nights in jail for Ruthowsky before he can be sprung.

Repeatedly Clark raised his head to glare at 44-year-old Ruthowsky, who was found guilty on all but one charge (trafficking in marijuana) by a jury last month. At times, Clark practically growled.

Before launching into his lengthy delivery, Clark said: “I warn you in advance these reasons are quite blatant.”

Lafontaine, in the morning, had urged the judge to “err on the side of restraint.”

But Clark was clearly not having any of that, just as he declined entreaty for a concurrent sentence, bundling only the first three charges, plucking out the trafficking charge (technically, conspiracy to commit an indictable offence) for the add-on three years.

Ruthowsky, formerly a veteran member of the guns and gangs unit, had admitted at trial that he used unorthodox methods to fight crime, motivated by a mission to get guns and drugs off the street, eliciting crucial intel by grooming a wide rogue’s gallery of police informants. The Crown argued he was a cop on the take for nearly a year, in cahoots with those same informants to line his own pockets, accepting $20,000 a month in exchange for tip-offs about raids and investigations, allowing the criminals to operate with impunity.

Three dealers, most vitally Mr. X, the prosecution’s key witness, told a jaw-dropping tale, about how Ruthowsky had initiated the dirty-dealing relationships, had invited Mr. X to a raid on a Hamilton grow-op to eyeball the goods (half of which was to be returned to the trafficker), had once sold a seized cocaine press back to the dealer and had even, on his own initiative, paid for laboratory testing to identify a cocaine-cutting agent (to squeeze out another participant in the chain-of-drugs protocol), which ultimately, as Clark noted Tuesday, put even more drugs on the street.

The jury believed the dealers. They didn’t believe the accused, who spent more than a week on the stand, often imparting “lengthy soliloquies” to the jurors, “repetitive, rambling answers,” said Clark, “the purpose of which was to evade the thrust of the question.”

Ruthowsky’s version of events was, said Clark, “so implausible that it borders on farcical.”

“The offender was accepting bribes even before he and (Mr. X) had commenced their corrupt relationship,” said Clark, revisiting how Ruthowsky had made the tit-for-tat proposal to Mr. X, making it clear he wanted the same graft pact the dealer had enjoyed with a previous officer. “Did he know the price?” reminded Clark, quoting Mr. X quoting Ruthowsky.

“He continued to accept bribes even after he was suspended,” said Clark of Ruthowsky, who’d never registered Mr. X as an informant, as per Hamilton police policy.

Ruthowsky had set himself on a path of corruption that involved “deep consideration” and “conscious decisions” with “a sense of almost supreme entitlement,” Clark said.

Clark went so far as to pour ridicule on the commendations Ruthowsky had received during his police career, noting that such professional laurels are part and parcel of a job where the objective is “a desire to make the community a safer place.”

While he was actually doing the opposite.

The judge turned as well to the words Ruthowsky offered last week, when Clark invited him to speak in his own defence. Ruthowsky said he and his family were “shocked” by the jury’s verdict.

“It has destroyed my life and destroyed the life of my kids and I and my family’s life will never be the same.”

Clark: “You destroyed your own life by taking those bribes.” Further: “I see no indication of remorse.”

On the first count, bribery, Clark pointed out that the maximum sentence is 14 years. He gave him 10.

On count two, breach of trust, maximum punishment is five years. He gave him four.

On count three, obstruction justice is punishable by a maximum of 10 years.

“Given once again the number of separate incidents, the serious nature of those incidents and the length of time over which your disgraceful behaviour was ongoing, I hereby sentence you to a term of imprisonment of eight years.”

Those sentences will run concurrently.

On count four, which Clark said was distinct, he agreed to reduce the sentence permitted, giving Ruthowsky three years, consecutive.

Taking into account time served and time on bail restrictions, Clark sentenced Ruthowsky to a term of 12 and a half years.

Ruthowsky is still facing 16 separate criminal charges, including bribery, breach of trust, perjury, cocaine trafficking and weapons trafficking, along with another clutch of disciplinary and insubordination charges under the Police Services Act.

As he was ushered from the courtroom, Ruthowsky turned to his family: “I love you guys.”